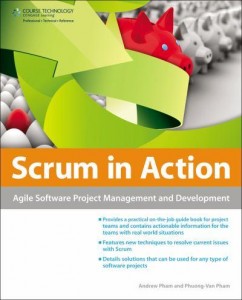 Unlike the traditional command and control environment, management responsibility is now split among the three different components of the Scrum team: ScrumMaster, development team and product owner. Although the ScrumMaster and the product owner do not directly manage the team, they are responsible for project reporting to the management of the business. This is true, according to Ken Schwaber in Agile Project Management with Scrum, even if we no longer report by tasks on a Scrum project but only by requirements.

Anyone can be considered a leader on a Scrum project as long as that person has some influence over the team. To the surprise of some purists and our delight, in his blog, Mike Cohn mentioned product owner, ScrumMaster, and even functional manager, as examples of leaders who can influence the direction and success of a Scrum project. But to paraphrase what Mike Cohn wrote on his blog, there is more to leading a self-organizing team than buying food or letting the team do what they want. Leaders on a Scrum project should influence teams in an indirect way. Welcome to Andrew Pham and Phuong-Van Pham, that wrote Scrum in Action: Agile Software Project Management and Development in 2011.

Even though their discussion that follows is somewhat different from the CDE (Container, Difference, Exchange) discussion on how to lead a self-organizing team in Mike Cohn’s excellent book, Succeeding with Agile Using Scrum it does share a common premise in that the Scrum project team requires quite a bit of management and leadership to work, contrary to popular beliefs. A well-known technique for coaching, one of the preferred techniques used by servant-leaders to enhance a team member’s performance, is known as the GROW model (which stands for Goal, Reality, Options, and Will).

In order to be a good leader or a true manager, the authors think you should be:

Pham & Phuong-van Pham discuss the important role of product owneras well. The seven qualities of a great product owner are:

Closest to home for a project manager is the role of the product owner, as you may agree with me.

The authors have more to bring to the table. Finance speak to get buy-in from management. A visual gathering of requirements. To verify that the requirements (user stories or PBIs) are properly written and ready for development, the product owner and the team can use the CUTFIT rules. These rules require that the story point be consistent, unambiguous, testable, feasible, independent, and traceable.

As a consequence of Scrum success, more and more companies are contemplating rolling out Scrum to their entire IT department. One of the impediments to this is the fact that the story point value is unfortunately not comparable between teams.
The authors offer a new technique based on an objective criteria-based estimating process in the form of a series of relatively straightforward tables to guide the team in their effort to estimate the different stories or PBIs. As simple as it is, this method allows us to make objective comparisons among teams as well as among different members of the same Scrum team.

As software professionals, many of us are accustomed to doing a lot of architectural design using all kinds of tools. Then along came eXtreme Programming, which dictated that we should only design as we go. The success of Scrum seems to have amplified this phenomenon.

But as lessons start to emerge from Scrum projects, it has become clear that without an architecture vision, the chunk of user stories the teams get from the product owner will look like a stack of cards, without any clear idea of what the final product will look like. With a clear architecture vision laid down at the beginning, one observes that team velocity does not fluctuate much, but instead increases over time. To arrive at this architecture vision, we must first identify user stories that share common business data and consider building them together. By splitting the user stories along common business data elements, the team will be able to organize their work and develop in parallel. This is something many software managers have dreamt of because they see the potential benefit it can be to team performance.
Working with common business data also allows the team to lay down some sort of stable data architecture, a key ingredient to good data reporting and analytics. Another benefit of this is to allow the product owner to change the project’s sequencing without negatively affecting the team’s velocity.

The authors share their wisdom on other topics as well, such as adapting Scrum, when to have a Scrum Master, automated testing, teamwork and the question whether you can have an abnormal end of a sprint. Scrum in action is a must have on your journey beyond the Scrum bootcamp.