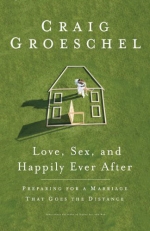 We’re designed to go all the way, to really live happily ever after as married couples. Young adults perceive pain, fear, cheating, adultery and divorce as “normal”, because of failing relationships among friends and family. Craig Groeschel, founding and senior pastor of LifeChurch.tv, recently ranked the nation’s second largest, wrote provoking books like Chazown, Dare to Drop the Pose and The Christian Atheist (reviewed in 2011).

He strives to put the bar on the highest possible position. Just as Christ loves his Church, we as man should love our wives. And in submission to their husbands, women do rebel against the current morals.

Groeschel starts with priorities. God is the One, your husband / wive the Two. Not the other way around and no others should replace this ranking. Next is marriage preparation, where the pastor gives his point of view on finding the One, dating, courting, attracting, sexuality, communication, forgiveness and growing relationship with God. There’s huge difference between a wedding and a marriage.

Love, Sex & Happily Ever After – Preparing for a Marriage That Goes the Distance tells about Groeschel’s own choices before he came to know Christ. And yes, these were radically different from the pursuing of holiness afterwards. In my humble opinion not all will agree with Groeschel’s strict advices on dating: just talk and walk, not getting physical in any way, even abstain from kissing! The author think it’s possible to save physical intimacy to the time after the wedding day.

Large parts of the book deal with sin, grace and forgiveness. Recovery and understanding each other. Short chapters ‘For him” and “For her” describe the differences between men and women in communication and acting.  Groeschel and his wife have 6 children, so don’t expect the “happily ever after” to be a quiet time, without any distractions, fights and disagreements. The author’s goal is not to condemn or withold anyone to get married at all. First, he offers a different perspective on a marriage that lasts a lifetime. And second, he plans to offer you hope.

The book was released in 2007 as Going All the Way and now contains a study guide as well.