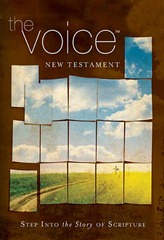 The Voice Bible translation is a fresh, so-called dynamic translation of the Scriptures. Ecclesia Bible Society and Thomas Nelson Publishers brought together a team of scholars, pastors, writers, musicians, poets and other artists to revive the language of the Bible to modern day standards. Second important goal was to respect the different styles in the books: poetry, laws, genealogy, parables, history, speeches, sermons and proverbs, to name a few.

Rather than a word-for-word translation or a pure thought-for-thought paraphrase (like The Book / Living Bible) the story of the Bible is retold in a form as fluid as modern literary works, yet remaining painstakingly true to the original Greek, Aramaic and Hebrew texts. To help the reader understand how the new rendering of a passage compares to the original texts, several indicators are embedded within the text. The text also has:

No attempt was made to make The Voice gender neutral or gender inclusive. The sense of the text is followed and translation is done with context in mind. So, adelphoi becomes “brothers and sisters” in 1 Corinthians 15:1-8, but the warnings against loose women in Proverbs 5-7 are clearly aimed at young men.

Another important choice was made in translating Christos, transliterating as Christ, but rendered as “God’s Anointed”, “The Anointed” or ‘The Anointed One“.

Four different reading plans are offered to step into the whole story of God: readings to celebrate Advent, readings for Lent and Easter, read the New Testament in 24 weeks and 40 days with God (daily reading for personal growth).

To give some impressions, I start with the last verses of Matthew 28: “Jesus: I am here speaking with all the authority of God, who has commanded Me to give you this commission: 19Go out and make disciples in all the nations. Ceremonially  wash them through baptism in the name of the triune God: Father, Son, and Holy Spirit. 20Then disciple them. Form them in the practices and postures that I have taught you, and show them how to follow the commands I have laid down for you. And I will be with you, day after day, to the end of the age.”

Next, a part of the Christmas story in Luke 2: “8Nearby, in the fields outside of Bethlehem, a group of shepherds were guarding their flocks from predators in the darkness of night. 9Suddenly a messenger of the Lord stood in front of them, and the darkness was replaced by a glorious light—the shining light of God’s glory. They were terrified! Messenger: 10Don’t be afraid! Listen! I bring good news, news of great joy, news that will affect all people everywhere. 11Today, in the city of David, a Liberator has been born for you! He is the promised Anointed One, the Supreme Authority! 12You will know you have found Him when you see a baby, wrapped in a blanket, lying in a feeding trough. 13At that moment, the first heavenly messenger was joined by thousands of other messengers—a vast heavenly choir. They praised God.”

Lots more on the translation process can be found at hearthevoice.com. You can compare The Voice’s translation to other English translations as well online. To conclude: easy to read, screenplay format really helps and the in-text commentary makes Bible study even easier.