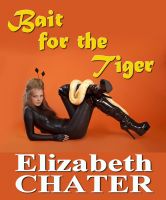 Elizabeth Chater‘s science fiction works are being made available to a whole new generation of readers, thanks to her family. While teaching at San Diego State University in the 1960’s, Chater and her student, Greg Bear, had created the first Science Fiction Creative Writing class at the university level in California, which then paved the way for the world famous comic con being held in San Diego. In the novelette Bait For The Tiger strange things happen in Ore Valley. It’s a funny story about a possible invasion of aliens and secret settlements on planet Earth. In the Pentagon research is being done on mind-reading and alien attacks. In Ore Valley green lights are spotted. While on a top secret mission investigating these, FBI agent Phil Norton goes missing.  Chester, the mind-reader and clairvoyant, Abbot, recording all evidence and Jones, the security officers, work together on this case. The Pentagon brings in the woman Phil married in secret, the exotic dancer Valentine Norton. She’s willing to do anything to help get Phil Norton back, even go under cover in a town now overrun by an alien race known as the Masters. This dancer uses a robot snake as an accessoire (hence hinting to the cover picture and book title). How this comes to an end, I’ll not tell you 🙂

It takes some time to get the storyline straight. Lots of facts need to be explained first. After reaching that point the book reads easily. Though the dancer’s infiltration into the aliens’ settlement sounds incredible, it’s not too distracting. The end is somewhat an anticlimax. Compared to the slow timelapse in the book’s beginning, it ends too fast. My conclusion: entertaining book, but not too exciting.