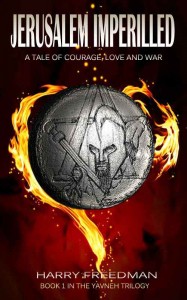 Harry Freedman wrote a historical novel on the years leading to the destruction of the Jerusalem Temple, 66-70 AD. Jerusalem under the influence of the corrupt Procurator, Gessius Florus, divided by political, religious and revolutionary group. Tensions in the city are intensified by the young Meir ben-Batiach, who dreams of freeing his country from the Romans. His uncle, Yohanan Ben Zakkai, a highly respected rabbi and statesman, is his counterpart, seeking peace instead of war. Levi, son of a local priest, marries Nechama, daughter of a wealthy merchant. Soon afterwards, the newlyweds are taken captive separated from each other, sold into slavery, and shipped to Rome.

As a trusted slave in the port of Ostia, where the boats from Judea dock, Levi captures the conflicts, conspiracies and battles in Judea. All the while seeking to find his lost wife and his way home, he’s engaged to a mistress, but at the end of the book he gets a glimpse of his Nechama again. Titus and Vespanian reach out to conquer Jerusalem. Zealots, Sicarii, Pharisees and Sadducees all try to get saved and rescue the Temple, the dwelling place of the Almighty. Nevertheless, the famine takes its toll and Titus wins the war. Levi’s last pictures are of the enslaved Jews and the former Temple treasures brought to Rome.

Jerusalem Imperilled is Book One in the Yavneh Trilogy. Harry Freedman  enriches his novel with a lot of historical names, situations and sceneries of Israel. At some points Yeshu (Jesus Christ) and his teachings and Paul and his letters are woven into the storyline, without becoming a ‘christian novel’. In contrary, more emphasis is laid on personalities like Prince Shimon, Ben-Zakkai and John of Gischal, the Idumeans and Eleazar. Bloody scenes, love story, murder, war and courage, it’s all in this 2-part book with lots of smaller storylines in each chapter. Quite often I found it hard to follow the the actual storyline. So, if you go for it, please read it carefully.